To investigate how smartphone users touch on their phones’ display we developed Hit It! a game for the Android plattform. Players’ task is to just tap on appearing circles. The game is freely available for Android phones and has been installed more than 250.000 times. The parts of the collected data has been used for the following publications: 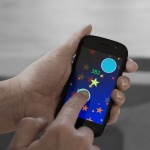 We published multiple updates of the game to fix bugs but also to collected more aspects of the players behaviour (e.g. the devices orientation). Furthermore, we developed a function that shifts the position of touch events (see [1]). After publishing this function as an update we evaluated it by assigning players to one of three conditions. One third of the players are assigned to the control condition, one third is assigned to the experimental condition (the shift function), and for the last third the function is used for 50% of the played levels (we haven’t analyzed this condition so far). Thus, not all data is available for all installations.

Format of the data

All data provided by each installation is collected in a single text file. Each row in the text file describes an “event” that is marked by a preceding tag. There are the following five different tags:

The data fields are seperated by a semicolon. E.g. the characteristics of the device typically looks as follows:

Each level consist of multiple “microlevel”. The following is a microlevel with two circles:

Each time the player hits the screen a new event is created:

The end of a level is just described by the following tag:

I would be happy to provide the data to anyone interested in it. Unfortunatelly, the data set currently consist of more than 200.000 files and more than 10GB of data. You can download a subset of the data containing files provided only by Galaxy Tabs (GT-P1000). If you need the complete data set drop me a mail and we can discuss how I should provide the data to you.