If you want to process camera images on Android phones for real-time object recognition or content based Augmented Reality you probably heard about the Camera Preview Callback memory Issue. Each time your Java application gets a preview image from the system a new chunk of memory is allocated. When this memory chunk gets freed again by the Garbage Collector the system freezes for 100ms-200ms. This is especially bad if the system is under heavy load (I do object recognition on a phone – hooray it eats as much CPU power as possible). If you browse through Android’s 1.6 source code you realize that this is only because the wrapper (that protects us from the native stuff) allocates a new byte array each time a new frame is available. Build-in native code can, of course, avoid this issue.

I still hope someone will fix the Camera Preview Callback memory Issue but meanwhile I fixed it, at least for my phone, to build prototypes by patching the Donut’s (Android 1.6) source code. What you find below is just an ugly hack I did for myself! To reproduce it you should know how to compile Android from source.

Diving in the source code starts with the Java Wrapper of the Camera and its native counterpart android_hardware_Camera.cpp. A Java application calls setPreviewCallback, this method calls the native function android_hardware_Camera_setHasPreviewCallback, and the call is passed further down into the system. When the driver delivers a new frame towards the native wrapper in return it ends up in the function JNICameraContext::copyAndPost():

The evil bouncer is the line obj = env->NewByteArray(size); which allocates a new Java byte array each time. For a frame with 480×320 pixels that means 230kb per call and that takes some time. Even worse this buffer must be freed later on by the Garbage Collector which takes even more time. Thus, the task is to avoid these allocations. I don’t care about compatibility with existing applications and want to keep the changes minimal. What I did is just a dirty hack but works for me quite well.

My approach is to allocate a Java byte array once and reuse it for every frame. First I added the following three variables to android_hardware_Camera.cpp:

To actually use the buffer I change the function copyAndPost by replacing it with the following code:

If the buffer has the wrong size a new buffer is allocated. Otherwise the buffer is just reused. This hack has definitely some nasty side effects in common situations. However, to be nice we should delete the global refference to our buffer when the camera is released. Therefore, I add the following code to the end of android_hardware_Camera_release:

Finally, I have to change the mutex used in the function postData. The Java patch below avoids passing the camera image to another thread. Therefore, the thread that calls postData is the same thread that calls my Java code. To be able to call camera functions from that Java code I need another mutex for postData. Usually the mutex mLock is used through the line: Mutex::Autolock _l(mLock); and I replace this line with Mutex::Autolock _l(sPostDataLock);.

Unfortunately this is only the first half our customization. Somewhere deep inside the system probably at the driver level (been there once – don’t want to go there again) is a thread which pumps the camera images into the system. This call ends up in the Java code of Camera.java. Thereby the frame is delivered to the postEventFromNative method inside Camera.java. However, afterwards the frame is not delivered directly to our application but takes a detour via Android’s message queue. This is pretty ugly if we reuse our frame buffer. The detour makes the process asynchronous. Since the buffer is permanently overwritten this leads to corrupted frames. If you want to avoid this detour this must be changed. The easiest solution (for me) is to take the code snippet that handles this callback from the method handleMessage:

and move it to the method postEventFromNative.

This might have some nasty side effects in some not so specific situations. If you done all that you might want to join the discussion about Issue 2794 and propose an API change in the Camera API: Excessive GC caused by preview callbacks thread to find a proper solution for the Camera Preview Callback memory Issue (and leave a comment here if you have a better solution).

As Android 2.0 will probably be available for the G1/HTC Dream soon I decided to keep up with the times and update to Android 1.6. Testing different Donut releases such as cyanogenmod and the vanilla htc version frustrated me. Support for processing camera images is still rubbish because of permanent memory allocation and garbage collector runs. Thus, I decided to bake my own donut. The guide below is heavily based on Johan de Koning’s Building Android 1.5 series and the Building For Dream Or Sapphire documentation.

In order to build and deploy your own Android 1.6 you need:

Using Windows 7 I downloaded and installed VirtualBox 3.1.2. The virtual machine needs around 14GB hard disk and 2GB RAM. To install a Linux I downloaded Ubuntu 9.10 mounted the ISO image and installed Ubuntu inside VirtualBox. It’s also a good idea to install the VirtualBox Guest Additions and create a shared folder to exchange data with the host machine. My folders sharename is exchange and can be mounted by typing the following into a terminal:

Next step is to install all kinds of stuff to be able to download things conveniently and compile the system:

We also need Java but some parts of the source tree are (still) not compatible with Java6 and Java5 is not available as a package for Ubuntu 9.10. Following the Enea guys I used packages from the previous Ubuntu version Jaunty Jackalope. You first have to add the Jaunty repositories to your source list by typing:

in a terminal and add the following lines:

Afterwards Java5 can be installed by typing:

We need two additional tools to proceed. We will create a bin folder in our in our home directory:

The first tool is repo. We download it and make it executable:

The second tool is unyaffs a program that extracts files from a yaffs file system image.

We put the bin folder in our path by adding the following line to the .bashrc:

Getting the source and proprietary apps

Next step is to download the source code using repo and git. However, first we will create a folder for our source tree and then we can check out the donut sources:

This will take a while, time to buy a six-pack (needed when we’ll compile the system). When the check out finished (and you’re not to drunken) we can proceed.

To grab some proprietary binaries from your device which can’t be distributed due to legal reasons (whatsoever). Download the “HTC Proprietary Binaries for ADP1” from HTC’s developer site, add it to your source tree in vendor/htc/dream-open/ and decompress it. Afterwards you have to connect your Android 1.6 equipped G1 to your computer and make the device available to the virtual machine. Then execute the file from the vendor/htc/dream-open/ directory.

We also need the Android 1.6 recovery image which was available from http://developer.htc.com/adp.html a while ago. Unfortunately the links are dead now (but the files are still there…). At the time of writing you could get it by typing at the root of your source tree:

From the vendor/htc/dream-open/ directory run the “unzip-files.sh” script to unzip some proprietary files for your device.

Since we need some Google Applications which are not open source (e.g. the Market, Google Maps, …) we will extract them from the system image which we can download using:

Inside your home directory create the folder htc and extract the zip file to this folder. Afterwards we can extract the system.img using unyaffs:

To copy the apps to your source tree execute the attached copy_google_apps.sh script. In addition, you have to edit the build script to include these apps by replacing ~/mydroid/vendor/htc/dream-open/htc_dream.mk by an extended device_dream.mk.

Now execute the envsetup.sh script from the root of your source tree and run “lunch aosp_dream_us-eng” to specifically configure the build system for the G1/Dream.

If everything went well you find the result in the out/target/product/dream-open directory. If you want to deploy it on your G1 you have to boot into fastboot mode (shut down the device and power it up again while holding the BACK key). The fastboot tool is part of the Android SDK but can also be downloaded from HTC. I copied the files to Windows but you could probably also flash them directly from Ubuntu:

The first start will take some time but you can follow the process with adb:

You should end up with a system that hopefully looks and behaves just like a vanilla Donut release. Time to change the source and do some serious stuff. 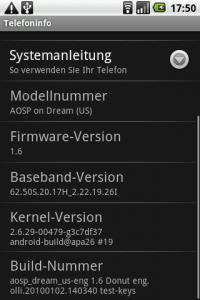 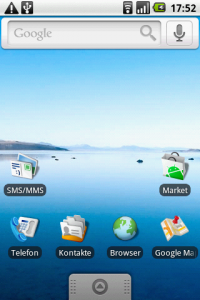